Month 4 of Covid 19’s impact on the UK education sector.

Right at the  start of the crisis the UK Office of Budget Responsibility predicted that in the 2nd quarter of 2020 output in education would be down by 90%.Published c.24 May, the scale of the estimated downturn was dramatic news for those in the business of education. It should also have been a clarion call for much serious joined-up thinking in Whitehall. 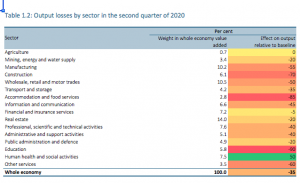 Since then it looks like the OBR’s estimates are largely correct and in some parts it may even be worse; edtech for example. Since the crisis many edtech providers have made the almost fatal mistake of making their products free for users. This may seem wise and altruistic but in reality it will accelerate the demise of many players, mostly those providing content as well as those selling personalisation systems.

There is no such thing as free and companies who are doing so assume that their sales to a grateful post-Covid 19 sector will more than offset the costs. Few have done any sophisticated financial modelling around this assumption – given the very real costs of server space/power, staff onboarding, etc., any return must be predicated on significant conversion rates from a market with steadily falling per-pupil prices. With rates for email, social media, paid search and online campaigns stuck south of 1% this seems unlikely, but what will make this triply challenging are the economic theories of Choice Paradox and Opportunity Cost. Choice Paradox is where you have lots of providers trying to sell similar products; this oversupply makes choice difficult and creates buyer anxiety and indecision. Opportunity Cost relates to the next best alternative foregone; if you chose something new, e.g. a K-6 maths product, what’s the cost of the next best alternative (almost certainly the maths product you use now)?

Free in edtech will be a death sentence for most of the companies now offering it. A far better approach and one you don’t hear often in the UK is what DreamBox Learning (K-6 maths) are doing in the US. Instead of free they are focusing on their existing paid customers,  helping them to make the product accessible to more of their users. This took user numbers from 3 to 5 million and turbo-charged their renewals. In an edsurge interview, DreamBox’s CEO Jessie Woolley-Wilson commented, “If we deliver some value to them in this crisis, we hope we become an essential part of their mathematics strategy and practice, and when it comes to renewal opportunities, district leaders will consider DreamBox more seriously and with more intentionality than they might otherwise have.” The simple lesson here is that if you have paying customers, focus on them. Don’t drive the value out of your relationship (and business) by giving away what they have been paying for.

Government has a big role to play right now but the DfE seems to lurch from silence to overhyped ‘solution’.A good example is the DfE’s emergency £100m to help schools and disadvantaged students. £6m is for a series for demonstrator schools to share best practice. Yet several similar iterations, including ones from government including City Learning centres (CLCs), Hub Schools program (eneded in 2010), the Harvesting Technology Grant (ended in 2012), and programs from quangos like BECTA (closed in 2011). Even commercial players have tried, for example the Pearson Champion Schools Program (created by Jodie Lopez, whose recent blog is a must read) and for years there has been a host of grassroots initiatives like the TeachMeet takeovers at BETT.

Another chunk of the £100m is for schools to implement GSuite and Microsoft 365, both of which have been free for years. If a school hadn’t implemented either of these pre-Covid, then instead of giving them money to spend on consultants charging up to £2k per day, OFSTED should rate their management as inadequate. Most of the money is actually for devices and connectivity for schools and disadvantaged students – a good idea even if it has been delivered slowly. The current global demand for low-cost devices is probably 2-5 times current supply and capacity, so the fact that the government has managed to get over 140,000 low-cost devices is something of an achievement.

When you add to £100m the £630m spent on edtech, the total  is still less than 1.5% of the £45bn the government in England spent on K12 education in 2019/20. Yet with such a small level of investment the government, schools and the wider community seem to expect that edtech can make a significant impact on the current challenges to education. I think edtech can have far more than a 1% impact but that requires several things:

We have put billions into edtech over the last 20 years and most has been wasted. The real problem isn’t bad products (of which there are plenty) or a lack of guidance and funding; what’s wrong is that we have chosen to make the incentives all carrot and no stick. Simply giving schools and educators edtech doesn’t mean they will use it and having no sanction when they don’t takes away a core lever to try and achieve the outcomes underpinning the investment.

Why have private schools adapted to online education more rapidly and successfully than government schools? It’s very simple. If they didn’t, their customers (parents) would have stopped paying, lots of teachers would have lost their jobs and far more schools (than the estimated 50 so far) would have closed. Private schools have always spent less per student on edtech as their model of labour inefficiency (small class sizes) reduced the need. Yes, their students have the devices, but this hasn’t been the driver behind their successful adaptation. Government schools and teachers on the other hand have been fully funded and paid despite a sizeable minority manifestly failing to even try to teach students. Yes, many teachers have ignored their unions and done amazing work, but the huge differences in what is provided and what is being done by students in the two sectors is too vast to get mired in the usual politics of state versus private education. We won’t see a progression in the ‘evolutionary fitness’ of government schools until there’s more than just incentives (carrots) to do so, there must also be sticks. The ‘badges for all’ ethos so widespread in state education doesn’t cut it during a crisis.

Let me know what you think?